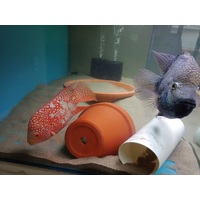 While Flowerhorn Cichlids are well established with various strains of reproducible colors and patterns, the Red Texas Cichlid is in a much earlier stage of its development. Because of this the overall quality of each fish varies widely between individual specimens, which means only a few specimens grow to exhibit the brilliant red and black colorations that are so highly sought after. The rarity of species with the brilliant red show coloration and the scarcity of their availability in the aquarium hobby has meant that their price is often quite expensive and can vary wildly between various sellers and aquarium stores. example, High quality red texas can be worth $1000 upwards if the fish turns red
While high quality show specimens are a rare to find, aquarium stores will often have fry or juvenile Red Texas Cichlid which while a gamble, buying one may turn out to be an attractive fish and worth an extreme amount of money which will make everyone want to purchase the fish from you, However, owning red texas has its benefits of show quality and can turn out to be a very attractive and rewarding fish to watch and show off to others.