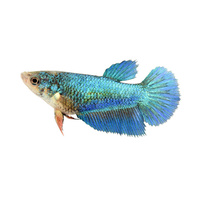 The Siamese fighting fish (Betta splendens), also known as the betta, is a popular fish in the aquarium trade. Bettas are a member of the gourami family and are known to be highly territorial. Males in particular are prone to high levels of aggression and will attack each other if housed in the same tank. If there is no means of escape, this will usually result in the death of one or both of the fish.

Female bettas can also become territorial towards each other if they are housed in too small an aquarium. It is typically not recommended to keep male and female bettas together, except temporarily for breeding purposes which should always be undertaken with caution