The Oranda Goldfish is one of the most popular goldfish in the world. It is favored for its hood, a fleshy growth on the top of its head called the wen. The wen starts to show at about 3 - 4 months, but only really begins to form at about 1 - 2 years. The hood is fully developed when the fish gets to be about 2-2 1/2 years old. The Oranda Goldfish in the picture is too young to have a well developed hood.

This beautiful goldfish has a large, round shape, shimmering scales, and a long flowing split caudal (tail) fin that fans out when it stops swimming. It is not surprising that the Chinese refer to it as the "flower of the water." In Japan, it is called Oranda Shishigashiri, and there's a calico version they call Azuma Nishiki. In Asia, though the common name Oranda is generally applied to these fish, varieties with the fleshy growth covering the entire head are known as Tigerhead or Tiger Goldfish. 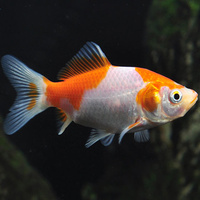 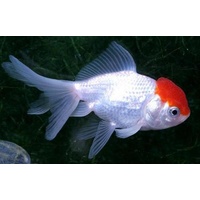