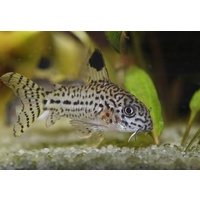 Indigenous to the lower Amazon region, primarily the Parnaíba River of Brazil, Corydoras julii is found in flooded forest regions as well as creeks and small tributaries. It is often confused with Corudoras trilineatus, a species that is found in the upper Amazon.

Julii Corys are smaller and more stout in build, with a shorter head and rounded snout. They also have smaller spots, while Corydoras trilineatus has spots that tend connect into a reticulated pattern. This is particularly noticeable on the head. This species reaches an adult size of a bit over two inches

Like similar Cory species, the body is silvery gray. A dark zigzag stripe runs along the lateral line from the gills to the tail. Above and below this dark line is a section that is not spotted, beyond which are many small dark spots of varying sizes. On the body, some of these spots connect to form short lines, but on the head, the spots are distinctly separate, a feature that differentiates this species from similar Corys.