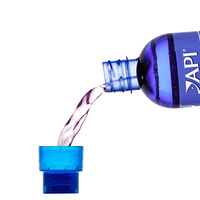 Ammonia,one of the worst killer of fish in your aquarium, so if you are doingwater changes or if your water suddenly has an ammonia spike, immediately treat it with API AMMO LOCK.

Ammonia is produced from the waste of fish and invertebrates. Ammonia is also released from the gills of fish during osmoregulation as well as from bacterial decomposition of excess food, decaying plant material and decom-posing animal material.

The majority of the ammonia entering the water from fish is diffused through the gills. Regardless of the source, ammonia is problematic to all living organisms in high amounts. The lethal effects of exposure to ammonia in fish are severe gill damage leading to suffocation, kidney damage due to inability to osmoregulate, and the increased inability to secrete ammonia from the body resulting in metabolic and physiologi-cal imbalance. Even at low levels, ammonia problems are documented in reduced growth rate and damage to gill filament tissue.

Ammo lock is scientifically proven to protect fish cells and especially their gills against ammonia.  Ammo Lock works immediately, in both fresh water and saltwater aquariums by detoxifying ammonia and removing chlorine and chloramines.  Ammo Lock does not remove the ammonia but locks it up as a nontoxic form until it can be filtered out through naturalbiological filtration (detoxifying).