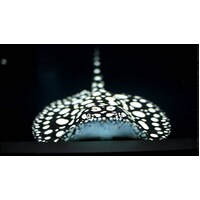 The diamond stingray (Dasyatis dipterura) is a species of stingray in the family Dasyatidae. In the wild it is found in the coastal waters of the eastern Pacific Ocean from southern California to northern Chile, and around the Galápagos and Hawaiian Islands. This bottom-dweller generally inhabits sandy or muddy flats near rocky reefs and kelp forests, to a depth of 30 m (98 ft), though off Hawaii it may range considerably deeper. As its common name suggests, this species has an angular, diamond-shaped pectoral fin disc that is plain brown or gray above, with rows of tubercles along the midline and on the "shoulders". The long, whip-like tail has both dorsal and ventral fin folds, which distinguish this ray from the closely similar longtail stingray (D. longa). It typically grows to 1 m (3.3 ft) across.

The diamond stingray attains a disc width of 1 m (3.3 ft) or possibly 1.2 m (3.9 ft); females grow larger than males. Its pectoral fin disc is rhomboid in shape, slightly wider than long, with angular outer corners and subtly convex margins. The snout is blunt-angled and non-projecting. The eyes are fairly large and immediately followed by the spiracles (paired respiratory openings). The mouth is strongly curved, containing 21–37 upper tooth rows and 23–44 lower tooth rows; the teeth are small and blunt, and arranged into flattened surfaces. Three or five papillae (nipple-like structures) are found in a row across the floor of the mouth.

The whip-like tail generally measures up to one and half times the length of the disc, and bears one (more if replacements have grown in) long, slender, serrated spine on the upper surface, closer to the base than the tip. Behind the spine, there are long dorsal and ventral fin folds that rise gradually, reaching a relatively high apex before sloping down abruptly. The presence of the upper fin fold separates this species from the similar longtail stingray (D. longa), which shares most of its range. However, the tail is often damaged, in which case differentiating the two species in the field becomes all but impossible. Young rays have completely smooth skin, while adults develop a row of low tubercles along the midline of the back, flanked by two shorter rows on the "shoulders". The tail also becomes covered in prickles. This species is a uniform olive to brown to gray above, darkening to black on the tail, and off-white below.

***Stingrays are kept with our breeder located in Brisbane, we only offer direct flight airport to airport shipping***